It’s a long weekend here in New Zealand and after a weekend of doing various things I need to get into the garden and tidy up.  The weeds are growing – drought or no, they don’t seem to care!

The garden is a bit of a mess at the moment, it’s just been so busy at work and it’s almost been too hot to garden, so apart from a touch of weeding here and there and watering the vegetables and strawberries daily, it has been neglected.  Amongst the weeds though, I have a little magic in my garden.

You see I inherited this garden and it was all very civilised.  Mum had a beautiful garden, she had roses, she had carnations, she had various pretty perennials, she has the azaleas and camellias.  But never a Dahlia.  She liked them, but not enough to plant.  When I first went flatting my sister and mum bought me some “pots of colour” – my sister bought me a yellow Dahlia and it followed me from flat to my house – but it died eventually getting too wooden and old for the pot.  Mum always admired the bright yellow Dahlia and told me I had managed to keep it alive longer than she thought in a pot (that’s praise as she was green thumbed and I’m more of a pale lime thumb).

A year after mum and dad died and I’d moved in to the house, a bright pink Dahlia appeared out of nowhere across the driveway where mum and dad had previously dug out an old dying rose.  It came from nowhere.  After three years of this Dahlia my brother finally helped me pull it out – it had got wooden and straggly, and we dug out a number of tubers.

Then last year, I had a rogue yellow Dahlia by the doorstep.  Strange.  Then THIS YEAR … I have a row of Dahlias, but wait, not all yellow. Some double headed, some pink, some red, some orangey-red and some yellow.  What the????

While they are a splash of colour at a time when this part of the garden has bushed up and is mainly green… they are a little unwelcome due to their straggly unruliness and tendency to hide the other plants in the garden.  I’m very bemused.  Dahlias grow from Tubers.  They don’t self seed – as far as I’m aware – and what’s with all the different colours?

It has flummoxed me.  I won’t pull them out just yet.  I’m enjoying the colours.  However I do want the azaleas and carnations buried behind them to flourish so they will have to go.  My question to you out there – do you have any magic in your garden?  Do any of you have a solution to how they got there?  My brother suggested that perhaps the earthquakes caused tubers to rumble … the neighbour two doors down has lots of dahlias… but that’s a stretch of imagination, I reckon.

The drive lined with Dahlias. 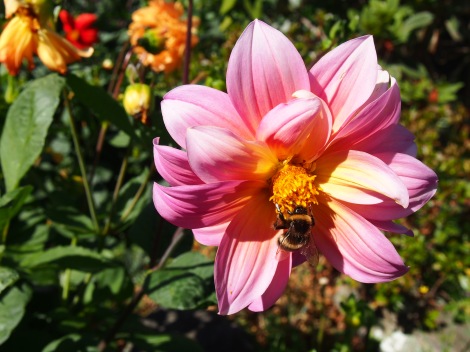 Mr Bumble getting his fix.

8 responses to “The great Dahlia mystery”