Okay, I’m a bit slow in getting to this one.  The institution I am about to write about actually returned to Christchurch on the 1st November last year, with queues an hour long!  However with the Christmas rush and one thing or another, it wasn’t until this weekend that I managed to get to it.

So what is this institution?

No, not the Rapper.  Vanilla Ice, commonly referred to as “Ice Cream Charlie” has been in Christchurch since 1903 and although the ice-cream truck originally was in the square, for as long as I can remember, they’ve had a permanent parking space along Armagh Street by Victoria Square.  It was always a great treat to wander down to the square and get your treat.  As a ‘returnee’ to Christchurch as a teenager, I didn’t really find Ice Cream Charlie until I started working just down the road in the BNZ building (now demolished).

So what makes a Vanilla Ice from this truck so special?  Tradition, I guess, and also the secret recipe.  To describe a vanilla ice, it’s not an ice cream, and it’s not a sorbet, but it’s kind of in between (it has a more icy texture than ice-cream or gelato).  Served with raspberry syrup and chocolate chips – it’s simple and tasty.  They have brought in some new flavours like chocolate and nuts, but for me it will always be the original.

Ice Cream Charlie disappeared from our streets after 22 February 2011, as the earthquakes meant that the city centre was cordoned off.  One of the reasons it took so long for the truck to return was they wanted to return to their Armagh Street site.  They were offered a place in Re:Start Mall and said no.  Fair enough, tradition is important. 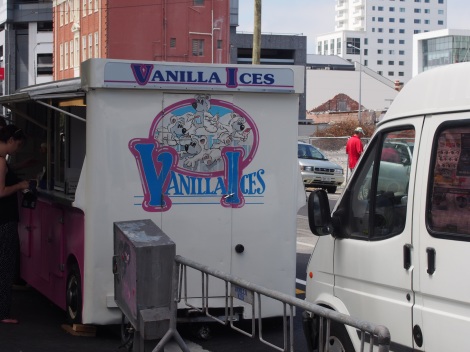 Parking space is reserved for “Ice-Cream between 9am-11pm”

So finally, close to four years later, in fact only about 5 weeks shy of their disappearance I finally wandered  into town for my Vanilla Ice treat. It was divine!

After having checked out one institution, I then went and took a photo of the completed (and recently re-opened) Isaac Theatre Royal.  They completely rebuilt this theatre from the middle out, keeping the facade sturdy with containers, demolishing the middle and retaining the back quarter, from which the famous internal dome hung.  It was the strangest rebuild to watch.  I can’t wait to get inside to see the final product – just waiting for the perfect event.  This is one beauty I’m glad has been restored!

The facade of the Isaac Theatre Royal, complete with graffiti

One beautifully restored facade attached to a fabulous new Theatre!

One response to “The Return of an Institution”

Getting my #craft on ... getting my Melbourne memories calendar sorted